My ongoing free Kindle story giveaway: things I have observed and learned

Friday I launched a promotional giveaway of my three short stories available through Kindle. It continues through Tuesday night. Here’s what’s happened, what it may or may not mean, and what’s meaningless but definitely fun.

I have six e-books uploaded to Kindle. Three of them are, of course, the three Clockwork Phoenix anthologies, which sell on their own at a slow, steady trickle. (For what it’s worth, the first volume consistently outsells both sequels combined. This is also true of the paperback edition.) 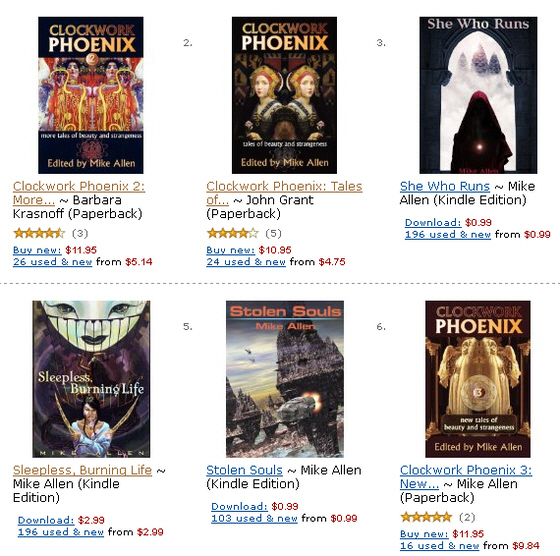 Then there’s my three short stories, weird sf novelette “Stolen Souls” (trivia: this piece was my first-ever SFWA-qualifying sale, 13 years ago (!)), and weird fantasy tales “She Who Runs” (from the anthology Sky Whales and Other Wonders) and “Sleepless, Burning Life” (a novelette, from Steam-Powered: Lesbian Steampunk Stories). I picked these for a variety of reasons. They don’t fit in the collection (The Button Bin and Other Stories) I have forthcoming from Dagan Books. Neither “Stolen Souls” nor “She Who Runs” were seen by many people in their previous appearances, and I was able to find art I liked that matched thematically. Steam-Powered, on the other hand, has sold well on a small press scale, and a number of the stories from it have been reprinted in even bigger anthologies. But I don’t think “Sleepless,” being very long and very strange, has much chance of further reprints — and perhaps more importantly, it already had a full color illustration plum for the picking as a cover, created for a promotional post card that was never printed.

So I released these stories, to, frankly, not much interest at all, heh. I’ve observed that free promotions on Kindle don’t necessarily do a lot for a book’s sales — once the promotion ends they tend to snap right back to the sales rank they maintained previously. However, it became clear I’d have nothing to lose by trying a free promotion — I did, after all, write these stories wanting them to be read — so I bided my time until now and went for it.

The thing you fear most with something like this is that you’ll offer your wares for free and still have no takers. I figured if at the end of five days I had 500 individual downloads, I’d call it a goal met.

As of this morning, the start of day three of the Evil Friday Giveaway (because really, every day is Evil Friday,) I’m past 900 downloads. Um, goal met? Goal met!

I’ve learned that achieving an Amazon “sales rank” above 2,000 (at least when it comes to free offerings) works out to about 100+ downloads a day.

Of course, I had to screencap this special achievement, which “Sleepless, Burning Life” managed yesterday. Note the sales rank.

Here’s what’s sobering. For all the flurry of activity, I’ve noticed no effect whatsoever so far on the sales of my not-free books. They’re selling no more or less than usual.

Here’s what’s fun. Seeing that hundreds of copies of these stories of mine really are in people’s hands (and hopefully they’ll actually read them!) Amazon “category bestseller lists” are basically meaningless unless your overall ranking has reached 4 digits or lower (and you’re not, um, giving your books away) but it’s been a trip to see my three strange stories suddenly climb their respective lists like a surprise last minute rappelling team.

Here’s a silly part: watching the download scores go up, I found it impossible not to think in terms of a race. Throughout the first day “Sleepless” had the most downloads, with “Stolen” hanging in at a close second and “She Who Runs” firmly in third place. But yesterday “Stolen” blasted ahead and built what looks like an insurmountable lead. “Sleepless” and “She Who Runs” are now vigorously competing for second.

And here’s something nice: after 13 years, “Stolen Souls” finally got its first new review (5 stars on Amazon, yay!) from Liz Campbell at Dark Cargo:

Stolen Souls by Mike Allen is a future Earth story, a far, far future, peopled by humans, things that were once humans, aliens, and Frankenstein-esque constructs of improved beings and stolen parts.

It opens with a guy being mugged…for his brain. His true love was stolen from him, destroyed when her assailants stole her cortex like a radio from a car. However, he refuses to accept her death as a permanent event and this begins a space-opera sized story of seek and revenge efficiently packed into a novelette.

Allen doesn’t do anything without a bit of horror loaded into his paintbrush, and for me, the horrifying question he presents in Stolen Souls is whether or not we retain our humanity if defying death becomes an option. Grief, death, learning to pick up and move on, accepting death as final, are part of what makes us human, defines much of our spiritual beliefs and the desire to move beyond death has shaped humanity. Are we still human if we don’t have to do that anymore?

Originally published at DESCENT INTO LIGHT. You can comment here or there.